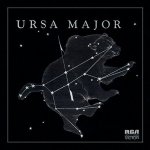 Ursa Major is an underrated and long-forgotten band from New York that released only a single album back in the early ’70s.

This power trio, led by gifted guitarist/vocalist and in-demand session player Dick Wagner (The Frost/Alice Cooper/Lou Reed), played Hard Rock/Heavy Psych material that occasionally bordered on Metal (the songs “Stage Door Queen,” “Sinner,” “Lay Me Down,” and “Silver Spoon”), but also included several awesome acoustic-based tracks (“Liberty and Justice” and “In My Darkest Hour”), and one tune that successfully bridged both worlds (“Back to the Land”). The band also featured sprightly and skillful bass work (thanks to Greg Arama) and tight and snappy percussion (courtesy of Ricky Mangone), and quite often, especially on songs with the blending of electric and acoustic guitars, the powerful, creative music reminds me of equally diverse groups such as Led Zeppelin, Ten Years After, Three Man Army, Rush, Triumph, and Captain Beyond, only with an undeniable American flavor.

As expected from a mighty talent such as Wagner, impressive six-string fretwork and vocals abound, while the highly ambitious and occasionally dramatic song arrangements (provocatively adding a touch of Prog Rock to the band’s mixture of styles) and the stellar production values (thanks to the legendary Bob Ezrin) amaze. Simply put, this album is a classic through and through, one of those collections that just makes the listener ache for at least one additional follow-up platter.

But as quickly as Ursa Major appeared on the scene, the trio splintered after touring with both Jeff Beck and Alice Cooper, then Wagner went on to work with Lou Reed the following year, and soon afterward, Cooper himself, when they cowrote the stunning track “Only Women Bleed.”

RIP Dick Wagner (1943-2014), an unsung guitar hero, vocalist, and songwriter who, in my humble opinion, never got the amount of plaudits he so richly deserved.