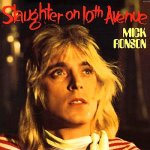 Basically, guitarist/vocalist Mick Ronson’s debut solo effort Slaughter on 10th Avenue includes all the musicians from Bowie’s “Spider From Mars” group but without Bowie himself.

Here, Ronson showed off his own voice, which had many of Bowie’s same quirky qualities, as shown on tracks such as “Only After Dark” and “Music is Lethal,” and he recorded this album just prior to briefly hooking up with Mott The Hoople until he and Ian Hunter went off doing their own “duo thing.”

In my eyes, Ronson was a unique and sorely underrated musician, more than simply a “sidekick” to Bowie, and although not perfect, Slaughter on 10th Avenue was nevertheless a classic of the glam-rock universe, displaying some impressive fretwork, songwriting mastery and orchestrations (such as on the grandly scored title track), and deserves many more accolades than it actually received at the time of its release.

(RIP, sadly, to both Mick Ronson and bassist Trevor Bolder!)