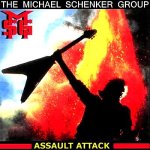 In my opinion, Assault Attack is the most enjoyable album The Michael Schenker Group ever released, and coincidentally, it’s the only one to feature Graham Bonnet (Rainbow/Alcatrazz/Forcefield) on lead vocals. In truth, I was never a huge fan of previous (and future) singer Gary Barden, so Bonnet’s appearance on Assault Attack renewed my waning interest in MSG, and what a dent he made.

On the band’s third studio album, Bonnet’s performance is simply terrific, gruff and beefy throughout, while Schenker’s memorable guitar riffs and wicked solos spatter out of the speakers like a series of deadly sonic bullets, continually hitting their mark. Tracks such as “Rock You to the Ground,” “Samurai,” “Desert Song,” “Broken Promises,” and “Assault Attack” simply shred, while “Dancer,” although seemingly hated by many fans of the group, is nevertheless my favorite, a song I adored because of the catchy chorus, Bonnet’s punchy delivery, and Schenker’s magnificent solo, chord patterns, and riff he delivers to support the punchy verses.

Meanwhile, constructing a solid rhythmic foundation, the formidable duo of bassist Chris Glen and drummer Ted McKenna employ the same tight and thundering teamwork as they utilized during their years together in both Tear Gas and The Sensational Alex Harvey Band, as demonstrated from start to finish. And with Tommy Eyre (also from The Sensational Alex Harvey Band) providing rich keyboard accompaniment along the way, the album packs a mighty wallop…an assault attack indeed!