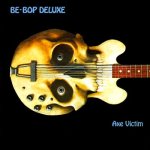 To me, Britain’s Be-Bop Deluxe was one of the most overlooked and finest “Art Rock” groups in history, with also one of the best “unsung guitar heroes” by the name of Bill Nelson.

At the beginning of its way-too-short history, though, the group debuted with Axe Victim, which at first glance (and listen) seemed almost a “David Bowie/Ziggy Stardust” clone. At the time of this album’s release, Be-Bop Deluxe had all different band members from its future “classic” line-up—apart from Bill Nelson himself, of course—and wasn’t as much Art Rock as it was Glam, with all members wearing (again) Ziggy Stardust-type clothing and make-up, and playing a musical style that, in many respects, eerily mimicked the Ziggy album.

The one big difference, however, was Bill Nelson’s instantly recognizable lead vocals along with his signature guitar tone and playing technique—not even close to Mick Ronson’s—which was highly advanced for the era. Plus, closer comparisons between the two albums reveals that Bill’s songwriting skills were also quite different from Bowie’s, and on hearing Axe Victim—especially tracks such as “Adventures in a Yorkshire Landscape,” “Third Floor Heaven,” “Jets at Dawn,” “Night Creatures,” and the title tune, for example—you could easily anticipate the various changes about to occur regarding the band’s upcoming shift toward Art Rock, which would arrive on the second album.