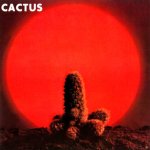 How many times my friends and I replayed this debut platter I cannot count, but I can clearly remember those days spent blasting this jamming, boogie-rock album with the fragrant scent of a certain type of “cigarette” wafting in the air.

Although I actually prefer the band’s 1971 follow-up release, One Way…or Another, this album also kicks major ass with tracks such as the wailing, stomping, and harmonica-laced “Parchman Farm,” the excellent Willie Dixon cover “You Can’t Judge a Book by the Cover,” the thumping “Oleo,” which showcases a manic bass solo courtesy of Bogert, and the grooving “Feel So Good,” which includes a ferocious drum solo from Appice.

Although Cactus seemed to get lost in the shadow of Britain’s higher-profile, blues-based acts such as Led Zeppelin, The Rolling Stones, Savoy Brown, Faces, and Ten Years After, the material on this album proved as solid as just about anything those other groups produced, if not more fiery and blistering, thanks to the killer rhythm section and Jim McCarty’s sizzling fretwork.