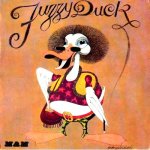 This band from the U.K. with the silly name released only a single album, and a damned good one at that. Full of Hard Rock with a ton of Jazz, Funk, Soul, and Progressive Rock touches, it’s often difficult to pinpoint an exact style, apart from the fact that the album is catchy as hell and an enjoyable listening experience, especially with a track such as “A Word from Big D” that even includes some Duck voices, I kid you not.

The album features some terrific guitar riffs, energetic rhythms, and punchy lead vocals, while the occasional Heavy Psych influences bring to mind groups such as Captain Beyond and the rollicking Hammond organ reminds me of the more upbeat side of groups such as Deep Purple, Atomic Rooster, Bloodrock, Mountain, and Grand Funk Railroad. In other words, on tunes such as “Mrs. Prout,” “In Our Time,” “Country Boy,” “Time Will Be Your Doctor,” and “Afternoon Out,” don’t expect much in the way of dark or sinister tunes, but mostly bright and uplifting melody lines and chord patterns with some tongue-in-cheek lyrics.

It’s a shame the band didn’t release more material. And speaking of which, a special note—if seeking out this album, be certain to hunt for the version with the four bonus tracks included. Thankfully, these tunes—”Double Time Woman,” “Big Brass Band,” “One More Hour,” and “No Name Face”—are of the same high quality as the album’s original tracks and definitely add to the overall fun.