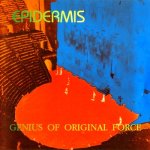 German band Epidermis released its four-song debut (and probably, its best album) in 1977, which contains a mixture of various Prog-Rock styles, some reminiscent of the more experimental bands of the era such as King Crimson or Grobschnitt. But when it comes to song arrangements and the instrumentation of numerous passages—the surprising inclusion of recorders, for example—and (especially) the vocals—often complex, with multiple counterpoint melody lines and harmonies—Gentle Giant instantly springs to mind.

In fact, the track “A Riddle to Myself” could have come straight off any Gentle Giant album, while the vocal sections on the eleven-plus-minute “Genius of Original Force” are eerily reminiscent of GG’s “On Reflection” from the Free Hand album mixed with some bits off the platter The Power and the Glory—only with Epidermis singing in its native language—while the instrumentation seems to mimic the style of GG’s In A Glass House release.

So for Prog-Rock fans who revel in the Gentle Giant sound and want to experience more of it, Genius of Original Force is an album you’ll certainly want to investigate.