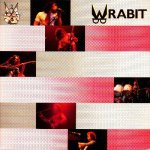 Back in 1981, I heard the debut album by Canadian band Wrabit and found myself catapulted into AOR heaven.

Featuring Lou Nadeau, whose excellent, crystal clear, wide-ranging voice is perfect for the genre, along with underrated guitarist John Albani, who would eventually go on to work with Lee “Metal Queen” Aaron, the album Wrough & Wready offered up ten tracks of ultra-catchy, hook-laden material.

Heavy guitar riffs and Pomp Rock keyboards, along with a tight rhythm section, lay a sturdy foundation on tunes such as “Pushin’ On,” “How Does She Do It,” “Just Go Away,” “Here I’ll Stay,” Anyway, Anytime,” and “Don’t Say Goodnite to Rock and Roll,” while Nadeau’s voice soars over the top and the grand, layered background vocals bring to mind the greatness of other “stadium rock” bands of the era such as Boston, Styx, Loverboy, and Journey.

This band should have been HUGE, but alas, fate had other ideas, and after the following two albums (1982’s Tracks and 1983’s West Side Kid) each slightly lower in songwriting quality than the debut) failed to gain attention, Wrabit disappeared.