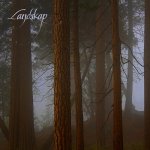 Like the group’s other two albums, Landskap’s sophomore release shows that this U.K. band is a rather unique animal on today’s music scene. Imagine what would have happened had The Doors gone Heavy Prog/Heavy Psych with more than a touch of Doom Metal and Stoner Rock included, with even a few jazzy rhythms sneaking in, and that’s what this act brings to the table.

Generally, on tracks such as “Leave It All Behind,” “Through the Ash,” “South of No North,” and “Tomorrow’s Ghost,” the music is delightfully dark and creepy, with growling Hammond organ and dreamy electric piano ala “Riders on the Storm,” grooving and often Sabbath-tinged guitar riffs, and a Jim Morrison soundalike behind the microphone.

Landskap would likely appeal to fans of other Retro-Rock bands such as D’Accord, Hypnos 69, Siena Root, Witchwood, etc. I find myself being drawn to this album more and more as the months pass by, continually reveling in the eerie yet driving atmospheres and the rock-solid performances by each musician.