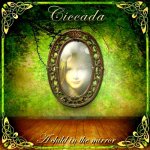 From Athens, Greece, comes Ciccada, a female-led band playing highly folksy music with a touch of Canterbury jazz and even chamber music tossed in.

On A Child in the Mirror, the first of only two albums by Ciccada, the arrangements on compositions such as the instrumentals “Elisabeth,” “Ciccada,” and “A Storyteller’s Dream,” along with vocal tunes like “A Garden of Delights,” “Isabella Sunset,” and the title track, are occasionally complex in the style of Symphonic Prog groups such as Renaissance and Camel and mixed with more than a smidgen of Progressive Folk music performed by groups like Gentle Giant, Strawbs, Jethro Tull, and Gryphon, thanks to a healthy dosage of acoustic guitar and “medieval” instrumentation such as flute, recorder, clarinet, French horn, violin, cello, and glockenspiel. And overall, the pretty voice of Evangelia Kozoni adds a generous amount of lilting elegance and sophisticated charm to the band’s folksy retro style.

The band isn’t about bombastic power or high energy, but of serene atmospheres and emotive melodies, with the musicians displaying their instrumental prowess without blowing up your stereo speakers in the process. Both this debut as well as 2015’s even better The Finest of Miracles are worthy of investigation for fans of lighter Progressive material that is also somewhat different from the norm.