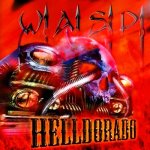 The often-maligned yet ever-determined L.A. glam rockers W.A.S.P. closed out the last century with a “back to basics” album—meaning no dark or introspective conceptual themes, no linked or orchestrated or experimental tracks, just raucous and rowdy and rebellious tunes with Blackie Lawless shrieking his lungs raw, blazing guitars, and thundering rhythms.

And let’s not forget the other band trademark from the early days of its existence—rude and raunchy (ie. juvenile) lyrics about (you guessed it) sex, sex, and, oh yes, more sex. (Or S.E.X. in grand W.A.S.P. tradition.)

In my eyes, nothing will ever beat the band’s self-titled debut from 1984, a brutal and blistering 5-Star affair through and through, but Helldorado—with slamming tracks such as “Cocaine Cowboys,” “Saturday Night Cockfight,” “Dirty Balls,” “Don’t Cry (Just Suck),” “Hot Rods to Hell (Helldorado Reprise),” and the title track itself—is at least a decent attempt at revisiting that album’s overall “take no prisoners” style.