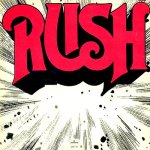 Although showing only a marginal hint of the influential Prog-Rock/Metal band Rush would quickly become, this hard-kicking debut album nevertheless had me racing to purchase it only a few days after hearing it for the first time.

Okay, a mini-survey: What die-hard Rush fan did NOT defiantly and joyously shriek “Yea, oh, yea” along with Geddy Lee during the introduction of “Finding My Way” every single time the opening track blasted out of the speakers?

If anyone says, “Not me,” they are lying!

Regardless, this album of mostly Hard Rock tracks is still enjoyable after all these many decades, with Alex Lifeson’s inspired guitar solos and riffs leading the way, and further reminding me why I preferred Geddy’s higher and rather unique “wicked witch” vocal delivery to his latter day “normal” singing.

Although this album also includes original drummer John Rutsey (RIP), I have absolutely no problems with his solid performance on this collection, even though he would prove to be no competition for the exceptional Neil Peart (and, let’s face it, not many drummers are, right?). By the time of the next album, Fly by Night, Neil Peart would be firmly ensconced in the drummer’s seat, and penning many fanciful lyrics, and his influence on the trio when it came to expanding its musical scope into Progressive Rock would be profound.

Anyway, with the release of this hard-rockin’ collection back in 1974, Rush seemed the Canadian equivalent to the mighty Led Zeppelin, especially with riff-heavy tracks such as “What You’re Doing” and “In The Mood,” the bluesy “Here Again,” the classic “Working Man,” and the aforementioned “Finding My Way” all included, and my friends and I defiantly rejoiced…”Yea, oh, yea!”