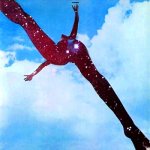 The legendary band’s self-titled second album, just as solid as its debut release Tons of Sobs earlier that same year, came to be considered another cherished gem by many fans, including myself.

On this release—oh, hell, on just about every single album on which he appears—Paul Rodgers nails each performance, his gruff and emotionally charged voice always laden with drama and angst, and clearly showing why he’s considered one of the best singers in the biz. Not only do the musicians—drummer Simon Kirke, bassist Andy Fraser (RIP), and guitarist Paul Kossoff (RIP)—play their blues-loving hearts out on both the gruff and forceful rockers we well as the laid-back, sometimes-haunting, folk-inspired ballads, but the album also contains a wealth of classic songs in the form of “Broad Daylight,” “Trouble on Double Time,” “Mourning Sad Morning,” “Songs of Yesterday,” and the wonderfully stark “Free Me.” Plus, my two favorite tunes on the album, “I’ll Be Creepin'” and “Woman”—both destined to be admirably covered by Three Dog Night in future years—would have also seemed right at home on any platter by the future Bad Company.