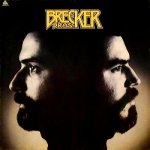 Randy Brecker’s time with the original line-up of Blood, Sweat & Tears proved short-lived unfortunately, and I heard nothing more significant from this talented trumpeter until he joined up with brother Michael (sax) in another fleeting group called Dreams (which also included ace drummer Billy Cobham).

Eventually, however, the siblings found a more permanent gig for themselves by forming The Brecker Brothers, which released its first album back in ’75.

Certainly initial comparisons to Blood, Sweat & Tears are understandable, but instead of sticking to strictly Jazz-Rock, the band also injected a healthy dose of Funk into its overall style. Heck, the vigorous and buoyant opening track is called “Some Skunk Funk”—which lives up to its name, by the way—and other flamboyant ditties such as “Twilight,” “Rocks,” “A Creature of Many Faces,” and “Sneakin’ Up Behind You” occasionally toss more Funk influences into the sophisticated song arrangements, although often blended with Jazz, Soul, and even Progressive Rock due to their general complexity. Thus, the debut album by The Brecker Brothers becomes almost a melding of Blood, Sweat & Tears with Tower of Power, only a mostly instrumental version of such.

Regardless, this debut, featuring—as one would expect—an impressive blaring-and-blazing horn section (the brothers along with the legendary David Sanborn on alto sax), plus a stunning array of Jazz-oriented backing musicians, is a thoroughly energetic and enjoyable affair, not only for “brass enthusiasts” like myself, but also for those who delight in often-intricate Jazz-Fusion material.