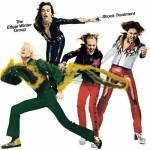 After 1972’s They Only Come Out at Night, a fairly decent debut album containing the monster hits (pun intended) called “Frankenstein” and “Free Ride,” how did The Edgar Winter Group follow up?

By creating another collection of eclectic tracks—a mix of rockers (“Some Kind of Animal,” “Rock & Roll Woman,” “Queen of My Dreams,” and “River’s Risin'”), and ballads (“Sundown” and “Someone Take My Heart Away”), and miscellaneous bits of Pop (“Miracle of Love” and “Maybe Some Day You’ll Call My Name”), bits of Jazz (“Easy Street”), bits of Funk (“Do Like Me” and “Animal”), and bits of other genres—along with another highly capable guitarist named Rick Derringer, who replaced Ronnie Montrose, that’s how.

Indeed, I actually enjoy Shock Treatment more than the band’s debut, thanks mostly to the talents of the sadly underrated bassist/vocalist Dan Hartman (RIP), the group’s chief songwriter, as well as the killer, sax-wailing tune “Easy Street” (which should have been a #1 hit) and the brutal Zeppelin-inspired “Queen of My Dreams.”

No, Shock Treatment is not a masterpiece in my eyes, as I feel it’s a tad disjointed overall with so many styles included. Nevertheless, I also feel it’s a rather savory, above-average album as it contains some exceptional tracks (“Easy Street” being the unrivaled gem), and a platter I still find myself craving from time to time.