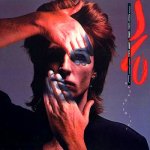 After the enormous success of his No Brakes album the previous year—thanks mainly to the classic single “Missing You,” which turned him into an undeniable superstar—John Waite followed up in ’85 with Mask of Smiles, another above-average collection of tracks with an eye-catching cover, that (oddly) seemed to get ignored by the fans, presumably since it arrived and got lost in the gigantic shadow of “Missing You.”

Although mainly due to its meager length (just over thirty-three minutes—come on, John, only nine short tracks? I’m assuming this album may have been rushed to release, thanks to record company greed) this is not my most-played Waite album overall (that would come next with 1987’s exceptional Rover’s Return).

Regardless, to keep me satisfied, this album does contain enough catchy rockers and memorable mid-tempo tunes such as “You’re the One,” “Ain’t That Peculiar,” “Laydown,” “Just Like Lovers,” “Every Step of the Way,” and “No Brakes” (named after the previous album, so I’ve often wondered if the song was an outtake). Plus, also included on Mask of Smiles is what I believe to be the strongest ballad Waite ever recorded—”The Choice”—which is simply brilliant.

Anyway, I’ve rarely disliked anything Waite created, whether as part of The Babys, Bad English, or as a solo artist, and I’ll always consider him—thanks to his instantly recognizable voice and his extraordinary knack for delivering emotional melodies—one of the leaders in the AOR genre.