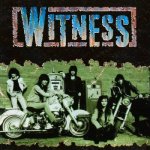 Originally from Atlanta, Georgia, the female-led Witness released only one album back in 1988, and in short, it kicked serious butt. In many respects, the talented group reminded me of Saraya, and produced material that seemed a heavier version of what appeared on Robin Beck’s solo albums from the same era.

This worthy collection contains a combination of driving rock songs (“Show Me What You Got,” “Do It Till We Drop,” “Jump Into The Fire,” “Borrowed Time”), tunes with AOR melodies and atmospheres tossed in for good measure (“Desperate Lover,” “Back To You,” “Let Me Be The One”), and a ton of catchy choruses to go around (just about every track).

With the right promotion, Witness may have had bigger sales, since it certainly possessed above-average material, so shame on the lame record company for doing seemingly nothing to promote the group. It’s also a shame that singer Debbie Davis never resurfaced in subsequent bands since she definitely had the chops. Thankfully, guitarist Damon Johnson did pop up in various groups through the years, the most notable including Brother Cane and his current band Black Star Riders.

Regardless, fans of female-fronted Hard Rock should definitely hunt down a copy of this album, and chances are they won’t be disappointed. Also note, appearing on the album as guest stars are guitarists Neal Schon (who also co-wrote two tracks) and Night Ranger’s Brad Gillis, as well as Journey’s Steve Smith on percussion.

This is a true and forgotten classic, with excellent material and enjoyable performances throughout.