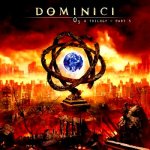 Although the first of the albums released under the Dominici banner—the Part 1 of the trilogy—proved to be nothing but a forgettable collection of acoustic rock and disappointed many fans like myself who expected a foray into Prog-Metal territory, the group’s second and third albums, however, actually did contain music not too dissimilar to Dream Theater.

Yet unlike Dream Theater, these last two Dominici releases seemed to have gotten lost in the musical ether and remain horribly obscure. It’s a shame, really, since both albums are actually quite impressive.

On O3: A Trilogy (Part 3), tracks such as “Enemies of God,” “Genesis,” “Revelation,” “King of Hell,” and “King of Hell,” offer outstanding musicianship, with decent songwriting overall, intricate song arrangements, and a highly polished sound.

Charlie Dominici truly did himself a favor by surrounding himself with top-notch players, his team easily rivaling the skill level and professionalism of his former group. Therefore, it’s too bad the band disappeared after this final release, since another album or two of this caliber might have finally gotten Dominici deservedly noticed by Prog-Metal fans.

Some reviewers on various music-related websites have labeled this album a masterpiece. I’m unsure if I’d go that far, but in my eyes, it’s at least a forgotten gem!