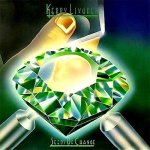 Seeds of Change, the debut solo album from guitarist and keyboardist Kerry Livgren, will always remain special to me for three reasons.

First, it showcases Livgren’s enormous skills as a musician outside the realm of his various groups—Kansas, AD, and Proto-Kaw—with music in various styles, including (primarily) Prog-Rock, but also AOR and a touch of Blues Rock.

Second, it features Livgren’s Kansas cohort Steve Walsh singing on the track “How Can You Live.”

And third, it also includes two exceptional tracks—”Mask of the Great Deceiver” and “To Live for the King”—sung by the legendary Ronnie James Dio, which makes Seeds of Change a “must-have” album for all fans of the ex-Rainbow/Dio/Black Sabbath vocalist.

Therefore, with the aforesaid tracks, as well as the Kansas-like Prog-Rock forays “Ground Zero,” “Just One Way,” “Down to the Core,” and the slide guitar- and harmonica-laced blues rock of “Whiskey Seed,” this is an above-average, commendable collection of tracks that Livgren, sadly, could never duplicate with the same level of success on his subsequent solo efforts.