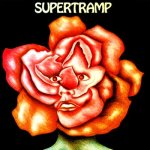 On the debut album from Supertramp, although much of the material is seemingly a million miles away from the style of music the group would produce during its 1974-1979 “glory period,” the band showed great promise nevertheless.

Additionally, since the line-up at the time of this release included only two members—Roger Hodgson and Rick Davies—who would continue on with Supertramp into its “glory period,” that explains much of the difference in style from subsequent albums.

One initial caveat…for those unfamiliar with this period in the band’s history, don’t be fooled by the cover art, which always brought the group Genesis to mind. But the music on offer here, although more Progressive than later Supertramp releases, has only marginal similarities to Genesis, mostly some of the folksier, pastoral atmospheres the groups occasionally shared in the beginning of their respective careers. Therefore, despite the cover art, don’t expect anything along the lines of “Supper’s Ready” or “Cinema Show.”

Instead, other than the song “Maybe I’m a Beggar,” where original guitarist Richard Palmer-James sings a portion of the lead (and has a voice not associated with the band’s popular sound), the music, for the most part, is still undeniably Supertramp. Tunes such as “It’s a Long Road,” “Words Unspoken,” “Shadow Song,” “Aubade and I Am Not Like Other Birds of Prey,” and “Surely” are probably the closest in style to the band’s heyday period, whereas “Nothing to Show” and sections of the lengthy “Try Again,” especially with the heavier guitar leads and Hammond organ, are completely different than what fans are used to hearing from the most popular version of the group.

So basically, what we have here is a promising band still struggling to find its trademarked sound/style, but producing some enjoyable music in the process.