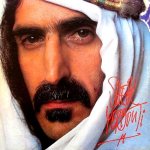 I state unequivocally, I love this double-album collection by the legendary Frank Zappa for three main reasons…

#1: To me, Zappa became a musical GOD the moment I first heard the album Hot Rats. The man not only shredded on guitar, churned out fresh and typically above-average material on a shockingly regular basis, and was a musical genius when it came to songwriting and scoring in a wide variety of genres. He was, in a word, brilliant.

#2: This collection of tracks is one of Zappa’s most creative and, in all cases with his music, is wonderfully performed by every musician involved.

Way, way back in 1979, I was working at a local record store (remember those, folks?) and one day we received a shipment of albums marked “PROMO,” including Sheik Yerbouti. The general rule, as my annoyingly prudish manager (so tight-assed you couldn’t pry a needle out of her butt even when using a tractor) had drilled into my head and those of my co-workers, was to immediately take ALL new “PROMO” albums (regardless of our personal musical tastes) and, throughout the week, play them repeatedly over the store’s sound system, thus encouraging customer purchases. (This rule was—and I quote her exact words—”A MUST! No excuses to do otherwise or face the consequences!”)

So I did as I was ordered, and during one of my shifts, promptly placed this album into the usual “weekly rotation.” Well, imagine my manager’s already pale face when the track “Broken Hearts Are For Assholes” came blasting out of the wall speakers during prime shopping hours on a Saturday afternoon.

Well, let me tell you, I about pissed myself freaking silly when she actually wobbled on her skinny legs when hearing the most sardonic (okay, wickedly crude) Zappa lyrics. Needless to say, she was NOT happy with me or the other employees for “following HER rules,” and for that utterly delicious moment in my personal history alone, I placed Zappa at the top of my “Music To Freak Out The ‘Suits'” Category, and (miraculously) adored him even more than I thought humanly possible.

Therefore, this album, which contains not only the hilarious “Broken Hearts Are For Assholes” track, but other zany, satirical, and classic ditties such as “Flakes,” “Bobby Brown Goes Down,” “City of Tiny Lites,” “Dancin’ Fool,” “Jewish Princess,” and “Yo Mama,” plus stunning guitar showcases such as “Rat Tomago,” will always hold a special place in my heart since it not only displays Zappa and his group at their creative best, but instantly brings to mind that magnificent Saturday afternoon at the record store.

By the way, a quick FYI…remember that store manager I mentioned? Well, she finally recovered from her shock at hearing the “A” word, then canned every single employee (including myself) several weeks later, turned the shop into a “religious-music-only” store while hiring fellow church members to replace us, and ultimately put the store out of business within two short months. Karma’s a bitch, and Zappa Rules! Oh, and most importantly, I swiped that “PROMO” copy of Sheik Yerbouti from the “to be returned” bin when I picked up my final paycheck and have cherished it ever since.