Since its formation in Germany back in 1970, Passport has been one of the best (mostly) instrumental Jazz-Fusion/Prog-Rock bands (and one of the longest-lasting bands in the genre) to have emerged. The material is ultra-professional (well-performed and well-produced), and the albums (especially those from the 1970s, like Cross-Collateral) are typically highly rated by many fans of the group and are some of my favorites in the genre.

Even way back in 1975 on Cross-Collateral, it’s abundantly clear that Klaus Doldinger (on sax, flute, and keyboards, including Moog and Mellotron) is masterful at his craft. The man’s woodwind solos always soar wildly with jazzy melodies, while his keyboards add the perfect spacey and ethereal atmospheres to tracks such as “Homunculus,” “Albatros Song,” and the blazing and lengthy title track.

Plus, the other musicians throughout history who’ve appeared on Passport albums also deserve high praise, especially those who perform on this release. Kristian Schultze’s Fender Rhodes piano contributions, sometimes wonderfully mellow as shown on “Damals” and the aforementioned “Albatros Song,” always add sparkle and structure, while Wolfgang Schmid’s nimble and melodic bass lines and Curt Cress’s always tight, slamming, and often-funky percussion energize tunes such as “Jadoo,” “Will-O’The-Wisp,” and “Cross-Collateral,” making for a seamless merging of Prog-Rock and Jazz Fusion.

As I mentioned, the band stands at the head of this particular sub-genre of Prog-Rock, falling along the same “high-quality” lines set by groups such as Brand X, Weather Report, Return To Forever, and Frank Zappa (his jazzier releases). Passport is top-class all the way!

From Los Angeles, Heart of Cygnus released four albums between 2007 and 2012. Over Mountain, Under Hill, the band’s second collection, contains energetic Progressive Rock with both Metal and Symphonic touches throughout. I couldn’t help but imagine a merging of groups such as Iron Maiden and early Rush with more modern Prog-Rock and Prog-Metal bands.

The singer has a wide range (occasionally reminding me of Geddy Lee without the shrillness) and tracks such as “Over Mountain,” “Under Hill,” “Lost at Sea,” “Revelations,” and “The Mountain King,” feature often jaw-dropping musicianship, thrilling guitar solos, and wildly diverse tempos, with creative musical arrangements galore.

Were this a perfect world, Heart of Cygnus would have received greater attention from lovers of the genre. Now, since the band’s most recent album came out back in 2012, I’m praying the band is still active and creating new material. 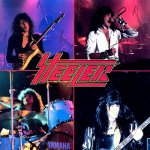 Not to be confused with the German band of the same name, America’s Steeler released a sole album back in 1983 and introduced the music world to a (then) twenty-year-old “guitar hero” named Yngwie Malmsteen.

I vividly recall the afternoon I heard this album for the first time, and when listening to the opening track “Cold Day in Hell,” I immediately repeated the guitar solo section several times, my jaw hanging to the floor. By the time I got to “Hot On Your Heels” (the last track on Side A) with its three-and-a-half minute “acoustic and electric guitar solo hybrid intro,” I could barely contain my excitement. This man could mutha-freaking play, his technique often reminiscent of both Ritchie Blackmore (Deep Purple/Rainbow) and Uli Jon Roth (Scorpions/Electric Sun), but not in any way a direct copy of either artist. And when it came to his speed on the fretboard? Well, it was unbelievable and remains, for the most part, unsurpassed.

But aside from Malmsteen’s spectacular riffing, the album contains mostly catchy and thundering tracks, those previously mentioned as well as “On the Rox,” “No Way Out,” “Backseat Driver,” “Down to the Wire,” and the moody, powerful, and lengthy closer “Serenade.”

Sure, the handful of songs I failed to mention are fairly average fare, but with Malmsteen’s guitar blazing throughout, and the band’s overall talent, it’s truly difficult to completely dismiss any of the tunes included on this release. Not to be forgotten, bassist Rik Fox (W.A.S.P./Hellion) and drummer Mark Edwards (Lion) formed a solid and commendable rhythm section, while vocalist Ron Keel had a forceful and recognizable voice perfect for the genre, therefore, this album proved a keeper and had me yearning for more material.

Unfortunately, the band broke up shortly after this album’s release, and Malmsteen went on to hook up with Alcatrazz while the remaining members joined or formed other bands, most notably Keel with his self-named group that released a string of albums through the ’80s.

Meanwhile, this is an album I’ve savored an unfathomable amount of times through the decades, and (for me) it altered the “metal scene” for good, thanks to one particular guitarist with enormous talent.

Because of its power-trio line-up and the era of its brief existence, not to mention the occasional hard-driving and often funky rhythms showcased on its debut album, this U.K. band always reminded me of the legendary Trapeze, only with a more “metal” edge.

And that’s what I originally viewed as a detriment—the fact that Trapeze possessed an extraordinary and recognizable vocalist in bassist Glenn Hughes, whereas Hard Stuff did not. So, to be perfectly frank, I originally never embraced this album due to its “only average” vocals.

But thankfully, with hindsight being 20/20, I reexamined Bulletproof in the past decade, paying closer attention to the stellar musicianship involved, and have since grown quite fond of it. Indeed, it’s heavy as hell, with occasionally Blues-influenced tracks such as “Sinister Minister,” “Taken Alive,” “Millionaire,” “Mr. Longevity,” “Time Gambler (Rodney)”,” “The Provider,” and “No Witch at All,” blaring out of the speakers. One other track in particular, “Monster in Paradise”—which I vividly remembered through the many years before once again revisiting this release—was a collaboration between Gustafson and Ian Gillan/Roger Glover of Deep Purple fame, and (to me) sounds as if it could have easily fit into the other band’s repertoire—or at least, I can easily imagine Gillan singing it.

Regardless, before finally disbanding, Hard Stuff went on to create a second platter (Bolex Dementia), but also altered its style a bit, thus leaving Bulletproof as the group’s unrivaled masterpiece. Therefore, fans of other Proto-Metal groups of the era such as Dust, May Blitz, Sir Lord Baltimore, Three Man Army, etc. who are unfamiliar with this group would likely find this debut album of interest.

White Spirit was a band from the U.K. that released a sole album back in 1980 and, due to its musical style (similar in many ways to bands such as Rainbow and Deep Purple) got lumped into the “New Wave Of British Heavy Metal” category.

But be warned if investigating this album: although the music is fairly enjoyable, with both tasty guitar and Hammond and synth solos popping up (hence the Rainbow/Deep Purple comparisons), the vocals are definitely White Spirit’s weakest link, with the singer being jarringly off key on too many occasions—especially when he unsuccessfully stretches for the high notes. Additionally, the production quality is often flat.

Therefore, both of those annoying factors bring down my overall rating of this otherwise decent collection of tunes by at least a full star (I ended up rating this 3 out of 5 Stars overall).

On a brighter note, the band’s guitarist was the talented Janick Gers, who would justifiably go on to big-time success the following year with the band Gillan, then later with Iron Maiden, and drummer Graeme Crallan joined up with Tank for a single album several years later.