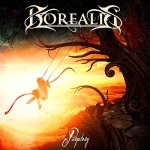 I’ve always considered Ontario’s Prog-Metal group Borealis as a more brutal, straightforward version of Symphony X, and on Purgatory, the band’s third release, the comparisons again come to the fore.

But there are some differences between the groups. For instance, the vocalist seems an even “growlier” version of Russell Allen, and punchy guitars tend to dominate the proceedings, are usually beefier in the mix, more so than the symphonic keyboards associated with the latter group.

Additionally, instead of finding lengthier “epic-like” compositions on this collection, Borealis’s songs are not as extended, more streamlined, with what seems a higher percentage of heavier moments as opposed to the more keyboard-dominated and airier passages Symphony X employs about evenly. Indeed, driving and bombastic tunes such as “Revelation,” “Destiny,” “Place of Darkness,” “From the Ashes,” “My Peace,” and “No Easy Way Out” kick major ass and make up the majority of the collection, while only “Darkest Sin,” “The Journey (Prologue),” and “Rest My Child” offer the mellower moments, a chance for the listener to catch their breath.

Be that as it may, the similarities in sound and style between the two groups is often quite startling, so I expect Borealis has a legion of crossover admirers like myself.