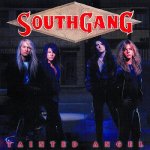 From the state of Georgia, the appropriately named SouthGang swept onto the music scene with Tainted Angel in the early ’90s around the same time as other highly melodic Hard Rock groups such as Firehouse, Sons of Angels, Slaughter, Warrant, and Trixter had started to gain attention from the record-buying audience and the MTV viewers. Although with a name like SouthGang, and considering the band’s state of origin, some people (such as myself) at first assumed the group would deliver a style of Southern Rock. Instead, however, the band sounded similar in many respects to the aforementioned acts, but with some chief differences—a talent for merging various Hard Rock styles and grooves, then creating intriguing song arrangements and catchy choruses, and finally employing slick studio wankery and trickery for added spice and zest.

Certainly, several tracks on the band’s debut album hinted at Southern Rock, such as the talk-box enhanced opening tune “Boys Nite Out,” along with the beginning and brief mid-section of “Big City Woman,” and the closing segment of “She’s Danger City/Seven Hills Saloon,” yet for the most part, the songs are fairly straightforward Hard Rock ditties mixed with a touch of AOR, especially when it comes to the stellar vocals and the stacked background harmonies. Other ballsy tunes such as “Georgia Nights,” “Russian Roulette,” and the single/MTV video “Tainted Angel” have gigantic choruses that, only after several hearings, rang through my mind for days on end. The band also included two stadium-rock ballads in the form of “Aim for the Heart” and the single “Love Ain’t Enough,” obviously meant to lure in the female audience, while “Shoot Me Down” and “Love for Sale,” as well as many of the previously mentioned tunes, seemed geared more toward the male party-animal crowd.

And with a slamming rhythm section in bassist Jayce Fincher and drummer Mitch McLee, a wickedly wild guitarist in Butch Walker, and a powerful and wide-ranging lead singer in Jesse Harte, SouthGang seemed to have everything going for it, including aid from Desmond Child, Jeff “Skunk” Baxter (Steely Dan/Doobie Brothers), and Kane Roberts (Alice Cooper), who aided the band either during the songwriting, recording, and production processes. This was no “cookie cutter hair band” of the era, but a group that had not only big-time support, but mastery over its instruments. Plus, the musicians also had a knack for incorporating numerous surprises into each song, whether it be unexpected rhythm breaks or key changes, inventive drum, bass, or guitar fills, or the addition of a brass section, harmonica and cowbells, light Hammond organ and honky-tonk piano, acoustic and slide guitar and the aforementioned talk-box, even one instance of female background vocals, all giving SouthGang that “unpredictable factor” that set it apart from its contemporaries. And with the ultra-catchy choruses, a budding “guitar hero” in its midst, the overall energetic performances and rowdy atmosphere, and slick yet robust studio production, the band truly seemed destined for greatness.

Unfortunately, after releasing another superb album (Group Therapy) the following year, SouthGang and other acts that played a similar style of music all seemed to disappear in the blink of an eye when the music industry suddenly began shoving nothing but Grunge down everyone’s throat. Such a shame, since the gifted SouthGang had the potential to offer even greater excitement to those of us who had little craving for the “Grunge scene.”