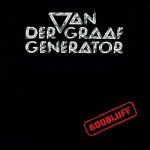 Back in 1971, Van der Graaf Generator released Pawn Hearts, a masterpiece of an album and probably my favorite in the group’s catalogue. But even through the band’s reputation and popularity seemed to be growing by leaps and bounds on the Prog-Rock scene, the group surprisingly disbanded, with leader Peter Hammill deciding to concentrate on a solo career in lieu of keeping the band together. Thankfully, and much to the thrill of many fans, Hammill resurrected the band several years later, and Godbluff popped up shortly thereafter. To my ears, the album proved to be yet another masterpiece, a collection of four complex tracks that certainly matched Pawn Hearts in regards to creativity, moodiness, and technical proficiency, so easily it remains my second favorite of the band’s works and the one I still play as often.

Now, compared to Pawn Hearts, this collection of tunes is almost as musically creepy, almost as wickedly demented, but a touch more straightforward (that is, if one can consider anything released by Van der Graaf Generator during the band’s early years as being “straightforward”) and more jazz-inspired. Included on this album are the classic tracks “Scorched Earth” and “The Sleepwalkers,” the songs that initially enticed me to further investigate this group in the mid-’70s, and causing me to fall in love with Van der Graaf Generator’s overall strangeness. “The Undercover Man” and “Arrow” are equally as enticing, and offer up even more weird and wonderful, dark and dastardly fun, clearly showing Peter Hammill, Hugh Banton, and Guy Evans in tip-top form, while David Jackson’s exceptional and unusual saxophone performances act as the icing on the already wacky cake.

So to me, Godbluff (as well as the previous Pawn Hearts) is definitely a “bucket list” album, one collection that every Prog-Rock fan should experience before they die.