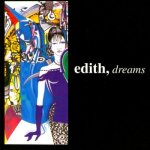 Talk about obscure and hard to locate! Dreams, Edith’s third release, is the one album I was finally able to track down and acquire through the years by this defunct Italian band from the 1990s.

The well-produced music offered on Dreams is pleasant, non-offensive Neo-Prog material, with tunes such as “Silent Whispers,” “Balance of Love,” “Out,” and “Africa” being generally melodic with a decent (albeit somewhat-quirky) vocalist who delivers the English lyrics with only the slightest of accents. Keyboards—mostly grand piano and spacey synths—tend to dominate the overall sound-picture, while both electric and acoustic guitar are also used in equal balance, with the six-string solos being sparse yet ever-tasteful. Moreover, on the tune “Friends,” the surprise appearance of woodwinds and an organ solo add extra spice to the album’s overall instrumentation. And through it all, the bassist is frequently given a chance to shine, his melodic runs acting as a solid backbone with the diverse yet often laid-back percussion. And speaking of laid-back, on tracks such as “I Dream of You,” “Endless Times,” “In the Darkness,” and “Dreamland,” the easygoing rhythms and flowing, unobtrusive background instrumentation become almost hypnotic in regards to the overall moodiness and almost New Age-esque atmospherics.

So when it comes to Dreams, there’s truly nothing outstanding being delivered in the musical spectrum, nothing earth-shattering to forever alter the Prog-Rock genre, but the music is certainly enjoyable enough, and I’ve found myself being drawn to this album countless times in the past few years, especially when I’m in the mood for serene and uncluttered musical nourishment. And better still, the album leaves me wishing I could locate the band’s other releases to see how they stack up. Additionally, no other major groups instantly spring to mind when attempting to compare this band to others—apart from perhaps the occasional nods to mellower aspects of IQ, Pallas, or Hogarth-era Marillion—so that’s also a positive trait for Edith.

Therefore, I firmly place this band into the category of “talented and overlooked…with albums difficult to locate.”