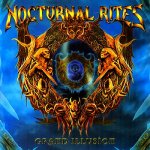 From Sweden, Nocturnal Rites released a string of eight studio albums between 1995 through 2007—most of them containing above-average material, in my opinion—with Grand Illusion being the second to last in the series. Although the band started out as a slamming Death Metal act, Nocturnal Rites quickly developed into one of the most consistent Power Metal groups, always delivering the goods in a highly professional and generally well-produced manner, despite various lineup changes as well as adjustments to the level of aggression and the amount of melodies included on each of its albums, which, in my eyes, always served to keep things from getting too stale. I realize that some longtime fans of the group have their preferred albums or periods of the band’s history; I pretty much like all the albums about equally, although I do seem to find myself playing the latter albums a bit more often these days.

Nevertheless, this collection (like always) features thundering and melodic Heavy Metal/Power Metal in a variety of tempos, with full and sizzling guitars, rich and grand keyboards, a rock-solid rhythm section, and a powerful vocalist who easily falls into the Jorn Lande style of “belting out the jams.” On tunes such as “Our Wasted Days,” “Deliverance,” “End of Our Rope,” “Fools Never Die,” and “Still Alive,” the band often reminds me of artists such as Firewind, Thunderstone, Kenziner, Tad Morose, Masterplan, Sonata Arctica, and At Vance, with memorable riffs driving the catchy material, hints of Progressive Metal included for extra spice, all wrapped up in a bold and bombastic package.

After the band released its next album, 2007’s The 8th Sin, Nocturnal Rites seemingly disappeared from the scene. Since the album received what I eventually decided was cruel and unfair criticism for being “too melodic” or “too keyboard heavy,” I had feared the worst, that the band members had collectively decided “screw it” and had called it quits. But thankfully, Nocturnal Rites returned a full decade later with the 2017 album Phoenix and a new guitarist in the ranks. Now I’m hoping the guys stick around for a good long while.