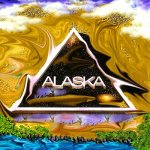 Not to be confused with the numerous other groups bearing the same name, this particular band (actually, a duo from Pennsylvania comprised of vocalist/guitarist/drummer Al Lewis and keyboardist John O’Hara) released a single album in the late-’90s. To me, Alaska’s music seemed a lighter, keyboard-dominated version of Yes or Cairo, mainly due to the highly symphonic arrangements and, especially, vocalist Al Lewis (also appearing on Starcastle’s final album from 2007), who has a range and delivery style similar to Jon Anderson (Yes) and Terry Luttrell (Starcastle’s original singer).

On this eleven-track collection, most of the compositions, including “WellsBridge,” “Forests of Heaven,” “Anyman’s Tomorrow,” “IceSpirits,” and “Tiananmen Square,” have an array of dreamy melodies and wonderfully rich and layered keyboards and vocal harmonies. And, truth be told, although I find nothing overly exciting in the way of varied orchestrations or rhythms, no tense dramatics or chord pattern surprises, the overall nature of the album makes for a decent, non-intrusive experience nonetheless.

Therefore, this one and only Alaska album contains nearly seventy minutes of gentle, melodious material, which is great for when I’m in a mellower mood, and for when I’m craving a massive amount of synth-driven Progressive Rock to fill the silence.