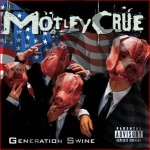 After probably the BEST Motley Crue album featuring the excellent vocalist John Corabi, the band returned with this piece of utter shit! Seriously, what the fuck is this crap? Mötley Crüe playing Alternative Rock? Give me a break!

I listened to the album (barely) twice, but couldn’t stand the sound of it, and Vince’s vocals are the worst in history. Why the band fired Corabi in order to lure Vince back into the fold (a less competent singer if I have ever heard one) is a mystery.

Needless to say, I never again listened to this album, nor did I purchase any subsequent release by this band. The John Corabi album was the best the band ever did, and sorry to say, they never recovered from the loss. Greed…ah, yes, greed…the previous album didn’t sell a g’zillion units, so they attempted to make magic with the old singer and got nothing but crap (and half the sales) for their efforts. I hope they learned a valuable lesson for their lust for greed.

Good GOD, the band is out of tune!!!! Seriously, folks, before recording, make sure your guitars and keyboards are tuned…TO EACH OTHER!!!!!

A complete waste of money. Buyers seriously beware, this is one of the worst albums to have ever existed. Avoid this at all costs or your ears will likely bleed.