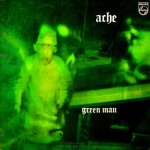 To me, this long-forgotten band from Denmark sounds like what might have happened had Uriah Heep released its debut album, only instead of including Dave Byron, Jim Morrison from The Doors was the lead singer.

Green Man, Ache’s second album, is a collection of Heavy Prog tunes with a wealth of Psychedelic Rock, Classical, and Jazz Rock overtones, not only bringing the aforementioned Uriah Heep to mind on occasion, but also other Hammond-rich groups such as Beggars Opera, Procol Harum, Black Widow, and early Deep Purple, although with a darker, almost Gothic atmosphere.

On this release, the band includes a splendid reworking of The Beatles “We Can Work It Out,” which alone was worth the album price.