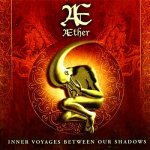 I stumbled across the two albums from Brazilian band Aether about a decade ago, long after the group had already ceased to exist, and although I cannot claim to have added either of the two albums to my “most played/favorite” list, I can acknowledge that both releases generally contain likeable Progressive Rock of the Symphonic and Neo-Prog variety.

On Inner Voyages Between Our Shadows, the band’s second and final album (and, in my opinion, the most enjoyable of the two), the group delivers some occasionally light and periodically majestic material, nothing to set the world on fire, but certainly pleasant enough for repeated listenings. When it comes to the overall mood, performances, and orchestrations on lengthy tracks such as “Forgiveness,” “The Gate,” “Scenes of Wondering Beyond,” and “Prayer for a New Meeting,” I would liken Aether as a delicate cross between acts such as Airbag, Galleon, Abel Ganz, and (Poland’s) Millennium, mixed with touches of Pink Floyd, Nektar, and (most definitely) Camel being other chief influences. Typically, the music here is melodic and laid-back Prog-Rock, often with a spacey and dreamy atmosphere, and with a fair share of dramatic moments.

Additionally, since on this particular album, the band also includes its own nineteen-plus-minute rendition of Mussorgsky’s multi-part “A Night on Bald Mountain” suite—also recorded by Fireballet on its 1975 Prog-Rock album christened after this very composition—then Fireballet would have to be another potential influence. Yet to me, Aether’s arrangement lacks some of the overall “combustion” I was used to hearing on Fireballet’s older version, offering instead a less-urgent and—frankly—less-spicy rendition of the tune. Certainly, the arrangement appearing here is still highly ambitious, wonderfully symphonic and even more classically oriented, but with a gentler approach. Definitely not bad at all, yet—and it’s certainly a matter of taste—I still prefer Fireballet’s more bombastic, more rocking, more Uriah Heep-ish execution. So no offense to any Aether fans or its talented band members, but the groups obviously differed in their approach to covering such a magnificent piece of music, and both ended up with commendable interpretations, but with divergent areas of emphasis, instrumentation, and (in the end) resplendence.

Therefore, Inner Voyages Between Our Shadows is a fairly savory album, with some intriguing material that should certainly appeal to the majority of fans seeking music similar to the aforesaid groups. And although it might not be on my regular “playing rotation,” it’s an album I revisit periodically, especially when I’m in the mood for lush yet easygoing Prog-Rock.