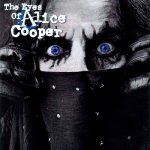 After the original and legendary band fell apart midway through the ’70s, Alice “Vincent Furnier” Cooper went on to produce an endless string of solo albums that, for the most part, never really impressed me. Apart from one or two releases (most notably Welcome to My Nightmare, his first solo outing), none of his material from the late ’70s and through the ’80s/’90s truly brought to mind the high level of creativity, amusing theatrics, or raw “garage band” energy of that original lineup. Instead, typically backed by a slew of faceless and glossy studio musicians, Furnier’s music often proved too slick, too sanitized, too over-produced, and sometimes even too “Bon Jovi-ish” for its own good, despite the often “dark” lyrics, which (aside from the spidery eye makeup) seemed about the only holdover from the olden days. Plus, since I still continue to replay the classic albums from the original band (Killer, Love It To Death, Easy Action, Muscle of Love, etc.) on a surprisingly regular basis, Furnier’s solo material just never could compete for my attention.

But thankfully, and finally, 2003’s The Eyes of Alice Cooper album comes close, or at least it does when talking about a more “garage band” sound. That became crystal clear the moment I heard the blazing opener, “What Do You Want From Me?” followed by another driving tune, “Between High School and Old School.” The guitars are thick and loaded with feedback, while the bass is thumping and the drums are slamming, just like the good ol’ days of the original group. Although for a variety of reasons, some tracks still don’t work for me on a guttural level (such as “Man of the Year,” “Be With You Awhile,” or the overly poppy “Novocaine”), there are enough old-school rough ‘n’ rowdy rockers like “I’m So Angry,” “Detroit City,” “Love Should Never Feel Like This,” “Spirits Rebellious,” and “Backyard Brawl,” plus the weird track “This House is Haunted,” that periodically mirror the original band’s glam rock/shock rock/garage rock genius. Indeed, after all these many years, with the punchy and punkish sound quality and the (mostly) consistent style of the songs, I can almost imagine guitarists Glen Buxton (RIP) and Michael Bruce, bassist Dennis Dunaway, and drummer Neal Smith wielding the instruments and backing up Furnier’s snarling, rebellious vocals.

Granted, I still feel this album lacks an ultra-snappy single as strong as (for instance) “Eighteen” or “Under My Wheels” or “School’s Out,” and no song comes close to resembling the creepy magnificence of a classic such as “Halo of Flies” or “Ballad of Dwight Fry” or “Dead Babies,” yet the stripped-down sound of the original band has been somewhat replicated on The Eyes of Alice Cooper, so to me it’s one of most enjoyable of Furnier’s solo albums since the original Alice Cooper’s Muscle of Love from 1973. 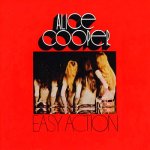 Although Easy Action, the band’s second album, still finds the group in a musical quagmire left over from the debut album Pretties for You (sort of like a bizarre version of The Beatles, one where the Pop Rock has a punkish attitude, a flower-power vibe, and some Zappa-inspired silliness and wild experimentation), you can actually hear the signature style beginning to materialize on tracks such as “Return of the Spiders” and “Mr. and Misdemeanor.”

It would take one more year, during which time the quintet relocated to Detroit to revamp itself, resulting in the classic Love It To Death album, until the band’s popular sound fully solidified.

Therefore, with the weird “Lay Down and Die, Goodbye,” “Still No Air,” and “Below Your Means” included on Easy Action, tracks where I need to be in just the right mood to enjoy, this is certainly not the band’s most accessible album, but one I nevertheless still play on occasions when I yearn for something more than a tad off the wall.

The album’s title should have been a warning. This is Alice Cooper doing Bon Jovi, plain and simple. Songwriter Desmond Child was both a blessing and a curse to music…sure, his songs helped put Bon Jovi on the map, but unfortunately, he kept writing the same darned songs over and over and over and over and over again, which is why this entire album sounds like “You Give Love A Bad Name, Part 187.”

The album gets a single star only because it’s Alice Cooper…on the flip side, the album loses 4 stars since a gifted, creative, true rock legend like Alice Cooper should have known better than to join forces with such a tedious and uninspired songster such as Desmond Child. Yes, utter trash!