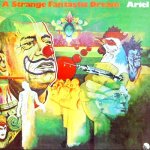 From Australia, Ariel was a band difficult to categorize. Take A Strange Fantastic Dream, the debut album, as an example.

At first blush, the band’s semi-commercial songs seem to easily fall into almost simplistic Hard Rock/Blues Rock territory, but upon further listens one can’t help but notice how Ariel includes frequent touches of Zappa-inspired humor and quirky instrumentation into each track, along with some intricate arrangements, and those crazy ingredients add a great deal of spice to the album’s overall appeal.

Song titles such as “Confessions of a Psychopathic Cowpoke,” “Chicken Shit,” and “Garden of the Frenzied Cortinas” make it clear there is something a tad “off” with this band, and in a good way.

So I would sub-categorize A Strange Fantastic Dream as “Art Rock with Attitude.”