I could never deny that, though it wasn’t one of my “regularly played” bands, 38 Special did indeed have something “special” when it came to its overall approach.

Not quite Southern Rock, not quite Hard Rock, not quite AOR, this band from Jacksonville, Florida somehow managed to successfully merge these genres into its music with fairly equal doses, generally making for some catchy material.

And with the legendary Jim Peterick (Survivor/Ides of March/Pride of Lions) co-writing some of the band’s biggest hits and most memorable tracks, 38 Special usually came off to me as a “southernized” version of Survivor.

Wild-Eyed Southern Boys, the band’s fourth release, is a perfect example of this “genre-merging.” With the classic hit singles “Hold On Loosely” and “Fantasy Girl” included, as well as other radio-friendly and occasionally countrified Hard Rock ditties such as “Back Alley Sally,” “Throw Out the Line,” “First Time Around,” “Hittin’ and Runnin’,” and the Sweet-Home-Alabama-like “Honky Tonk Dancer” occupying space within the platter’s grooves, this is the album I usually found the most enjoyable from the early days of the group’s existence.

As mentioned previously, 38 Special wasn’t a band I listened to on a consistent basis through the years, but when I’m in the mood for some catchy and lighter material of an upbeat nature, Wild-Eyed Southern Boys (as well as several other platters from the band’s catalogue) will occasionally suffice.

In the early ’80s, just as acts such as Journey, Foreigner, and Styx started filling countless arenas with their brand of undeniably catchy “stadium rock,” numerous bands appeared on the scene, attempting to duplicate that success. Some (such as Survivor, Loverboy, and 38 Special) achieved their lofty goal, while a greater number of deserving bands (such as Wrabit, Sheriff, Axe, Spys, Prism, Franke & The Knockouts, and Shooting Star, to name only a few), despite having some minor hits and/or receiving radio airplay, couldn’t quite snatch that fickle and elusive brass ring and their names continue to remain in relative obscurity.

Unfortunately, 707 fell into the latter category.

From Detroit, the band released a trio of albums from 1980-1982, each containing a slew of AOR/Hard Rock tunes, many of them three-to-four-minute bursts of melodic, guitar-heavy, keyboard-accented frenzy, that could have garnered hit-single status if only given the right promotion.

For example, on this, 707’s third album, the opening track “Mega Force,” despite being featured in the movie of the same name and being co-written by Jonathan Cain of Journey fame, should have rocketed up the Billboard charts, but Boardwalk/CBS Records didn’t seem to give a hoot. The same could be said for other melodic gems on this album, such as “Heartbeat,” “We Will Last,” “No Better Feeling,” “Out of the Dark,” and “Write Again,” but not one of them was released as a single, and therefore, the album quickly fizzled.

Despite the lack of record company support, the band sure had talent, with unheralded vocalist Kevin Chalfant and axe-slinger Kevin Russell, and in many respects, 707’s sound compared to Journey (no shock, since the “Steve Perry-like” Chalfant went on to work with ex-Journey members in both The Storm and The VU), but the band sadly broke up shortly after this album was released, regrouped with some new members for three additional albums from 2000-2006, before vanishing again.

Regardless, when it comes to AOR/Hard Rock material from the early ’80, Mega Force remains a favorite of mine. 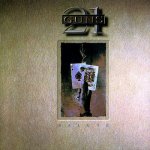 Featuring Scott Gorham (long-time guitarist of the legendary Thin Lizzy), 21 Guns released the first of three albums back in 1992. To me, this debut was the best of the albums, containing both solid rockers such as “Little Sister,” “Batter and Bruised,” “No Way Out,” and “Knee Deep,” and some inspired AOR-tinged tunes and ballads, including “Marching in Time,” “Tell Me,” “Just a Wish,” and the magnificent “These Eyes,” a track that should have been HUGE.

Gorham’s full and searing guitars, backed by the versatile rhythm section of bassist Leif Johansen and drummer Mike Sturgis (Asia/Wishbone Ash), and the hint of keyboards (also from Johansen) where needed, not to forget the spot-perfect vocals by Thomas La Verdi (with layered background harmonies adding glorious tinsel to the proceedings), truly made for a winning combination, and the writing team of (mainly) Gorham & Johansen proved impressive and formidable.

Indeed, Salute is a perfectly polished album with catchy-as-hell material, a collection of tracks I’ve continued to enjoy year after year.

Albums In My Collection

– Human Interest Story
– The Long Division
– Narrow-Caster
– Ones And Zeros: Vol. 1
– The World In Which We Live

This New Jersey band is a bit odd, and I say that in a good way.

First off, they’re not traditional Prog-Rock, despite the fact they use a lot of traditional (classic) Moog sounds on many tracks. Their style, instead, is more akin to Prog-Rock bands such as A.C.T or Kayak, or Art Rock bands such as City Boy or Be Bop Deluxe, yet I also hear some Echolyn, Spock’s Beard, and Gentle Giant-type influences on occasion. It’s an interesting blend that, in turn, allows 3rDegree to have their own style.

The band also includes a nice balance of soft (acoustic) and hard (electric) tracks. Their melodies are usually quirky, yet engaging, so they have a strong pop sensibility in their approach, and even though the majority of their tracks are shorter pieces (no 20+ minute epics here), they still cram everything from Metal guitar, Mellotron, jazz touches, avant-garde chord patterns, and even some intricate tempo shifts into their arrangements. What may at first seem like a straight-forward pop song, for instance, will often change upon further listens when you discover some  truly complex instrumental passages lay behind the pretty melody.

Also, the band’s full and rich background vocals are quite excellent, often bringing to mind bands such as Queen, A.C.T, 10cc, or Sweet. And when they toss in some intricate, counterpart vocals, the arrangements are almost “Gentle Giant-like.” Just listen to a track such as “The Gravity” off the band’s latest album Ones And Zeros: Vol. 1, or perhaps the song “Exit Strategy” from The Long Division, and you’ll see exactly what I mean. Again, excellent!

Also, I would be remiss to not mention the band’s lyrics, which are often sardonic, mature, and witty.

So basically, whatever the release, track by track, you just never know what to expect when each song begins. This band truly keeps you guessing, and although that’s not always a good thing with some bands, when it comes to 3rDegree, it’s usually entertaining and always well-played.

3rDegree just keeps getting better and better, and I look forward to hearing what they’ll create next.

The first thing that hit me when listening to 7 Months’s debut album was the clean, expressive, and commendable lead vocals that could be easily suited for an AOR/Arena-Rock act. And in general, the band’s ear for some catchy melodies seems its trademark when it comes to both the lead vocal and background harmonies as well as with the various guitar and keyboard fills. In other words, one will find a sufficient supply of hummable choruses and rather straight-forward tracks, setting this band apart from many other pure Prog-Rock acts that have a tendency for over-indulgence and over-complexity.

Generally speaking, 7 Months seems a nice (almost perfect) fusion between an AOR and Prog-Rock band from the 1980s, along with a generous, more modern, Prog-Metal touch, added quite sporadically.

While attempting to find comparisons for potential listeners, I realized the first band that sprang to mind when hearing 7 Months’s debut album was the more melodic side of a band such as Kansas, but then came an almost eerie mental-jump to bands such as Toto, especially considering the crisp production and some of the orchestration, guitar and keyboard tones, the melodies, and the general mood. But again, that was only a first impression, and upon duplicate listenings, I realized there was so much more on offer here. Sure, the band’s sound might have similar elements to the other bands I mentioned, but the difficulty I had in locating perfect comparisons leads me to believe 7 Months indeed has somehow concocted a sound all its own.

Several years ago, when first listening to Still Looking For The Answers, the debut album from 41Point9, I realized almost immediately the music could not be classified as “traditional” Progressive Rock. Instead, the group—consisting of bassist Bob Madsen, guitarist/keyboardist Kenny Steel, and vocalist/guitarist Brian Cline (ex-Enchant)—created a nine-track collection of highly melodic, almost AOR material with Prog-Rock influences added throughout most of the tracks.

Indeed, on the lengthier compositions such as “One in a Bar,” “Living in Hard Times,” “Promise the Moon,” “The Bullet’s in the Barrel,” and the breathtaking title track, the sometimes dreamy and hummable vocal melody lines might seem perfectly at home on the more experimental albums by groups such as Toto, Cannata, Dare, or Mr. Mister, while the instrumental accompaniment and the occasionally complex song arrangements lend a periodic Neo-Prog or Symphonic-Prog bent that, at times, reminds me of the aforementioned Enchant, as well as mid-period Marillion, Moonrise, or Spock’s Beard. (And speaking of the latter band, supplying percussion on this album are the two Spock’s Beard drummers, Nick D’Virgilio and Jimmy Keegan.) And aside from the one instrumental track—the moody and gripping “Surface Tension (A Drive Thru the City),” with its intriguing and spirited bass riffs and guitar solos—Cline’s dulcet timbre, mid-level range, and relaxed delivery style exudes an indescribable warmth that I could easily imagine blending in comfortably with any AOR group.

In general, the music included on Still Looking For The Answers is on the mellower side of the “rock spectrum,” with nothing too jarring when it comes to crazy time shifts, driving or sprinting rhythms, or bombastic instrumentation, but it’s all quite enjoyable for folks looking for occasionally dramatic and symphonic material that falls comfortably into the “middle of the road” territory between AOR and Prog-Rock. Therefore, this “outside the norm” approach, this merging of styles, makes 41Point9 one band to watch.