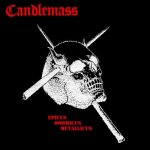 For me, Black Sabbath will always remain the epitome of the term “Heavy Metal,” so when another band appears on the scene that clearly attempts to replicate the Sabbath sound/style, I typically sit up and take notice.

Sweden’s Candlemass is one of those groups that caught my interest back in the ’80s, and I’ve enjoyed many of the band’s releases through the decades. The debut album, Epicus Doomicus Metallicus, the only collection to feature the band’s original vocalist, is an album I still play periodically due to the dark and gloomy “Sabbathy” atmosphere, the “Iommi-esque” guitar tones and ominous riffs, and the powerful rhythm section.

And while this particular vocalist doesn’t replicate any of the long string of singers to have fronted Black Sabbath through the years, his voice is nevertheless appropriate for the genre and Epicus Doomicus Metallicus, by and large, with tracks such as “Demon’s Gate,” “A Sorcerer’s Pledge,” “Black Stone Wielder,” and “Solitude” included, comes eerily close to duplicating the style of early Sabbath.