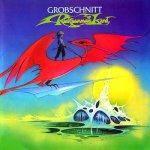 Grobschnitt has to be one of my favorite Krautrock bands from the ’70s, especially because the creative group incorporated various styles into its repertoire, from Space Rock, to Avant Prog, to Symphonic Prog, all typically underscored with Python-esque humor.

But beginning with Jumbo, the band’s third studio album, Grobschnitt started honing its style, dropping some of the Space Rock elements to focus instead on more structured songs within the Symphonic Prog realm.

Rockpommel’s Land—the fourth release, and probably the album I turn to most often from the band’s catalogue—shows Grobschnitt fully embracing this shift in styles, delivering one of its best platters, a fairly solid concept album that would set the band on an equal plane to acts such as Genesis, Yes, etc. Indeed, many of the guitar fills and instrumentation on the lengthy “Severity Town” and “Ernie’s Reise,” and especially on the twenty-one-minute, side-long title track, often remind me of what appeared on albums of the era from groups such as Yes, Flash, and Starcastle, although the various synth tones and keyboards have a more unique flavor. Moreover, the band’s tongue-in-cheek humor still pops up from time to time, while the recognizable yet heavily accented vocals further set Grobschnitt apart from its contemporaries.

Regardless, Rockpommel’s Land contains some impressive material overall—I have the version with the instrumental “Tontillon,” an enjoyable “bonus” fifth track—with terrific cover art surprisingly not created by the magnificent Roger Dean, but by Heinz Dofflein instead, although it obviously has a similar vibe.