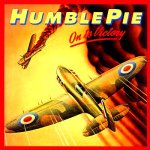 I’m not sure why this particular Humble Pie “comeback” album typically receives generally low ratings on many music-related websites. Perhaps it’s because the band at this time featured only two original members—drummer Jerry Shirley and the outstanding vocalist/guitarist Steve Marriott with his raspy, powerful, soulful delivery, undoubtedly the star of the show. For this album, Humble Pie also added Bobby Tench (Jeff Beck Group) on guitar, keys, and second vocals along with Anthony “Sooty” Jones on bass, yet perhaps because the album didn’t feature Clem Clempson’s tasteful lead guitar work, that may be part of the problem for some listeners.

And yes, this ten-track album may not contain the same overall raw and hungry atmosphere as many of the band’s releases from the early ’70s—Rock On, Thunderbox, or Smokin’, for example—but it’s nevertheless a definite step upward from the group’s previous (and poorly produced) ’75 release Street Rats. Plus, On to Victory does contain a gem of an opening track called “Fool for a Pretty Face,” along with the raucous and upbeat “Further Down the Road” and “Get It in the End,” the sleazy grind of “Take It from Here,” the bluesy and gut-wrenching “My Lover’s Prayer,” and the sax-enhanced “Infatuation.” And as always when it comes to a Humble Pie album, numerous tracks feature the gospel-tinged female background singers and an appropriate amount of organ and piano accents. Therefore, although On to Victory certainly isn’t a perfect album, not entirely “victorious” as the band no doubt had wished, it definitely ain’t half as bad as some listeners might have one believe either.

And hey, any album that includes an ass-kickin’ rocker with a silly title such as “You Soppy Pratt” can’t be too dismal, right?

Give me a dose of Steve Marriott’s raspy and raucous and rampaging vocals soaring over slamming Hard “Boogie” Rock and I’ll always be happy.

On the band’s fifth release, Humble Pie was at the top of its game, offering up some classic and (yes, I have to say it) smokin’ tracks, such as “Hot ‘n’ Nasty,” “C’mon Everybody,” “The Fixer,” “Road Runner,” and “30 Days in the Hole,” with the diminutive Marriott flexing his gigantic “vocal muscles” and belting out a storm over Clem Clempson’s heavy and sizzling guitar riffs, and the formidable team of bassist Gregg Ridley and drummer Jerry Shirley never sounding tighter or more thundering.

Smokin’ was a perfect example of a hungry band unafraid to add elements of Folk, Soul, and Funk into its overall solid Blues-Rock foundation to add tasty variety and further expand its sound.

Humble Pie is one band I wish could have lasted forever and ever and ever with this line-up of musicians, who really jived as a cohesive team…but alas, it ended all too soon.