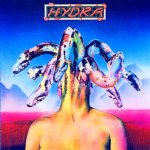 I love this sinfully obscure and melodic Hard Rock band from Atlanta, Georgia, which added strong Southern Rock influences and also a touch of Funk/Soul to its overall sound on each of its three studio albums.

Regarding the band’s style, Hydra often seemed to me like an Americanized version of Trapeze, even going so far as to feature a vocalist named Wayne Bruce, who possessed a similar tone, vibrato, and manner of delivery as the mighty Glenn Hughes, although without the ultra-high vocal range.

Also, on this debut album as well as the follow-up release Land of Money, the band included Orville Davis on bass guitar, who would eventually go on to join Starz, another one of my favorite—and underappreciated—Hard Rock bands from the ’70s.