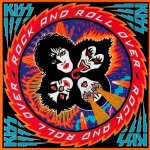 After the highly successful (but over-produced) album Destroyer (with the sugary sweet “Beth”—good God, spare me!), the band returned to the studio to produce a “back to basics” sort of album, with raw production values and nothing in the way of horrific and sappy ballads or lush string orchestrations to mar the hard-rocking proceedings.

Rock and Roll Over is perhaps one of my favorite Kiss studio albums, thanks to infectious, energetic songs such as “I Want You, “Makin’ Love, “Mr. Speed,” “Take Me,” and the Rod Stewart-inspired “Hard Luck Woman.”

Yes, as you might be able to tell from the above paragraph, I have a fondness for Paul Stanley’s contributions, although I must say that Gene Simmons (the other chief songwriter) also delivered some commendable goods with “Ladies Room,” “See You in Your Dreams,” “Love ‘Em and Leave ‘Em,” and the hit single “Dr. Love.” (Note: I don’t normally rank Gene’s contributions too highly, only since I’m not overly fond of his vocal performances, unlike Paul’s.) Regardless, Peter Criss’s sole writing contribution (and his performance) on “Baby Driver” (as well as his vocals on “Hard Luck Woman”) are quite killer. Too bad Ace Frehley didn’t have any songs included on this album, although he was never known for delivering too many tracks to the overall Kiss repertoire…his guitar contributions were usually enough for me anyway.

Nevertheless, on this album, every single band member is playing at his best abilities, so it’s tough for me to criticize it. Indeed, every song is basically a keeper in my opinion, therefore I still play it regularly. Rock and Roll Over…indeed!

Well damn it, after listening to this album several times, I have to concede that this is probably one of the most powerful albums of Kiss’s career, with much of the album reminding me of the feeling I had when first listening to the slamming Creatures Of The Night album when it appeared after the band had fallen into lackluster territory in the late ’70s/early ’80s.

Although many reviewers seem to provide each of the albums in the post-Creatures Of The Night era of the band (from the albums Lick It Up to Hot In The Shade) with less-than-enthusiastic ratings, I’ve always felt those ratings completely unjustified. Certainly, the band at that time (having finally removed the make-up and showing the actual faces of the musicians involved to the public) jumped on the “hair band” bandwagon and went a bit “heavy-commercial,” they still seemed rejuvenated and wrote some decent tracks (certainly better than the Unmasked period of the band). Indeed, I quite enjoyed that period of Kiss. Not only was the band consistently powerful on that string of albums through the entire 1980s, delivering some catchy—and generally loud—stadium anthems, but the band seemed to possess an endless infusion of high energy that put most of their contemporaries of that era (Warrant, Dokken, Bon Jovi, etc.) to shame.

Soon came several more releases, from Revenge to the Psycho Circus album, which (sadly) I never quite embraced. To me, the songwriting quality had greatly diminished, as did the band’s “fun factor” and “attitude,” with Kiss even sounding in some ways like just another lackluster, depressing grunge band of the era, which completely took me by surprise, as I’m sure it did many longtime fans. Sadly, during this period, I lost nearly all interest in any of the band’s releases.

Then, more than a full decade passed, and the band finally released another album, this one being a collection of remakes under the name Jigoku-Retsuden (which I didn’t purchase). Again, I had lost much interest in the band, and I certainly didn’t feel like revisiting a bunch of “Kiss doing Kiss” tracks. But then to my thrill, a year later, the true comeback album Sonic Boom appeared, and I finally saw more than a glimpse of the old Kiss Alive energy and the band’s rejuvenated “fist-raising,” “rollicking-good-time” image rearing its welcomed head. In many ways, that album reminded me of the “back to basics” approach Kiss used on the album Rock And Roll Over after the overly produced Destroyer album had smoothed off the harder edges of their sound (“Beth” anyone? Good God!). Anyway, although the overall Sonic Boom package wasn’t quite what I had prayed, it was far from bad and was certainly a giant improvement from the Psycho Circus album. Thankfully, Kiss decided to continue in the same vein, only adding even more Adrenalin to the mix, and finally, Monster appeared in 2012.

An undeniable, sorely missed energy encompasses the album, a drive that the band hasn’t fully displayed since the early 1980s, not since its Creatures Of The Night masterpiece of kick-ass heavy rock (and an album that somehow captures the energy of their live performances). As mentioned at the start of the review, I feel this is one of the most powerful albums of Kiss’s career, both studio and live.

The opening track, “Hell Or Hallelujah,” barrels through the speakers with full guns blazing, and the album barely lets up until the closing track “Last Chance.” Guitarist Tommy Thayer truly leads the way into crunch-territory, delivering some wickedly wild leads and some memorable riffs—many of them reminiscent of Ace’s best solos and riffs from the olden days, or even Bruce Kulick’s blazing leads and riffs during that underrated ’80s period—and all the while the current rhythm section of Gene Simmons and Eric Singer, along with Paul Stanley’s dynamic guitar fills, create a magnificently grand, round and rich and bombastic sound and ultra-killer delivery in the best tradition of “stadium rock.” The full and blaring vocals only add to the excitement and fury, coming across as a “dare to listen to us again” call to arms to the Kiss Army. Sure, there are a few tracks that are lacking a tad (not in overall power or energy, but in substance and memorability), yet many of the tracks are not only catchy and infinitely repeatable, but also rival many of the tracks of the band’s early “classic” Alive years.

Yes, Monster proves that Kiss are back in full swing, and let’s pray the ride lasts forever.

Oh, and one final note: Turn It F*cking Loud!!! 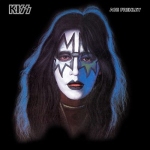 I purchased this album when it first came out, figuring it would be the best (ie. rockiest) of the Kiss solo albums. And for the most part, at the time, I believed I was right. But now, many decades later, and listening to my two faves (Ace’s and Paul’s solo albums) again, I find myself leaning more toward Paul’s release as being the best of the batch.

The reason, I eventually came to decide, boils down to one simple word…lyrics. Overall, musically, Ace’s album rocks the best (and most consistently) out of all four Kiss solo albums, but his lyrics are sooooooo godd*mned cheesy. I mean, come on…”Speeding back to my baby, and I don’t mean maybe.” Seriously??? All the other songs have similar “moon/spoon/June” type of lyrics that, although they don’t horribly ruin any of the songs, do not do them any favors either. Granted, Paul’s solo songs also don’t feature brilliant lyrics, but the silliness factor (the lack of imagination when it comes to rhyming) isn’t quite as apparent.

So musically, Ace’s album is probably the best of the four solo releases when it comes to “rocking tracks,” but his lyrics really make it difficult to rate this any higher than just slightly better than average. So mainly for that factor, Paul’s album is now my favorite. I should also mention that Ace’s voice usually leaves a lot to be desired, whereas Paul’s voice is much more accessible, so that’s the only other reason I eventually decided to rate Paul’s album slightly higher.