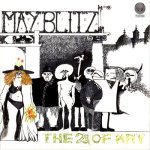 May Blitz, a hard-rockin’ and creative trio made up of two Canadians (guitarist/vocalist Jamie Black and bassist Reid Hudson) and a Brit (drummer Tony Newman, formerly of Jeff Beck Group who eventually joined Boxer and T-Rex) sadly released only two albums before disbanding.

Both albums are crammed with grooving and occasionally funky Hard/Blues Rock, Heavy Psychedelic Rock, and even a touch of Prog-Rock, with rather dark (proto-Metal) atmospheres overall. On this particular platter, the group’s second release, the driving opening track, “For Mad Men Only,” is a perfect example of that more metalized sound, with the band barreling out of the gate in the finest tradition of rock ‘n’ roll power trios—thundering and unrelenting rhythms and blazing guitar leads. A similar style also appears on “8 Mad Grim Nits,” the first track on the flip side, an instrumental where Hudson and Newman maintain a riotous beat behind Black’s often-explosive six-string antics.

Meanwhile, the other half-dozen tracks are less in-your-face, with “The 25th of December 1969,” “Honey-Coloured Time,” and “Snakes and Ladders” offering up mid-tempo fare loaded with both acoustic and electric guitar riffs, intriguing and varied percussion, highly melodic and jazz-inspired bass runs, and—especially on the latter track—hypnotic atmospheres galore. And one of my favorite tunes, the laid-back “High Beech,” with its beautiful acoustic guitar background and psychedelic vibes, could almost be a lost track from Ten Years After’s A Space in Time album.

The two lengthier side-closers seem almost text-book examples for bands on how to create captivating and almost free-form Heavy Psych material. The rollicking and flute-enhanced “In Part” even features a lengthy drum solo, a definite rarity for studio albums in any genre or in any era, while the luscious and dreamy “Just Thinking” allows the listener to float away on a sea of psychedelia—ideal for any listener who occasionally enjoys indulging in a certain type of…hmm…”cigarette.”

Overall, however, The 2nd of May is not without its flaws. Like on the band’s debut platter, Black’s lead vocals are indeed the weakest link. His delivery is often frail and perfunctory, lacking in all emotion, and his precision is not always meticulous. Yet May Blitz was never about vocal prowess, never about luring in listeners who demand a recognizable crooner churning out catchy and singalong lyrics, but instead, a raw celebration of tasty and mesmerizing fret-work. Therefore, Black’s generic vocals are in no way an aural affront to the ear drums, just a bit of a disappointment for those of us who can imagine what might have become of May Blitz had it also possessed a frontman as powerful and as sterling as its musicians.

And speaking of which, the fantastic musicianship on display here often reminded me of the excellent U.K. power trio Three Man Army (which—highly coincidental—also featured Tony Newman), another band that also never received the fame it so justifiably deserved. So fans of groups such as the aforementioned Three Man Army and Ten Years After, plus outfits such as Captain Beyond, Blues Creation, Groundhogs, Flower Travellin’ Band, Dust, and even Jimi Hendrix, will likely enjoy May Blitz, a band that disappeared way before its time.