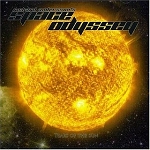 First, it MUST be said that the 2nd track, “Obsession,” is almost a DIRECT copy of Black Sabbath’s “Anno Mundi (The Vision)” from 1990’s Tyr album. Same EXACT background riff behind the verse, an almost identical melody, even some of the same words during the bridge. MAJOR plagiarism happening here.  I’m shocked this band didn’t get slammed (and sued) for it.

Nevertheless, I enjoy this release a lot, almost as much as their previous two releases.  This is more straightforward when it comes to the metal genre, as opposed to the more progressive metal of the previous albums, but still, it’s quite good.  I also love David Fremberg’s voice (I’m a fan of Andromeda) so this album works on many levels for me.

Still, it’s a shame about the Sabbath rip-off. Gosh, guys, what were you thinking???  At least be more clever about ripping off another band’s material apart from altering a few chords in the middle of the song and changing the lyrics…shame, shame, shame…