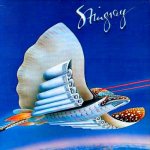 From South Africa, Stingray released only two albums before disappearing into the pages of musical history books, which always seemed a shame. This, the band’s debut album, brings to mind other talented yet relatively obscure AOR/Hard Rock groups from the same era, such as Ambrosia, Trillion, Preview, 707, American Tears, Touch, Franke & The Knockouts, Roadmaster, and Sheriff, all groups that might have easily made a bigger splash in the music industry had they been given the proper promotional push and financial backing from their respective record companies.

In the case of Stingray, tracks such as “Love Saver,” “The Man in My Shoes,” “Hard-Headed Loner,” “Breakdown,” and the excellent single “Better the Devil You Know” shine with endless melodies and memorable riffs that ring through your head long after the final tune fades away. Indeed, I wouldn’t consider any of the songs on this album as a “filler,” and with ten tracks in total, that’s saying a lot. Although I must admit, hearing this album nowadays, some of the pompish keyboard/synth tones sound more than a tad dated in places (alas, a lasting curse when it comes to those early synthesizers appearing on albums from this particular era). Yet the highly catchy material, the overall commendable musicianship, and especially the powerful lead vocals and layered harmonies make up for that one small fault, and this platter is still quite enjoyable all these many years later.

Therefore, fans of AOR/Hard Rock groups such as Styx, Journey, Survivor, Foreigner, and Toto who crave something similar yet more obscure from this period in history might want to seek out this album and relish the sing-along power of the music.