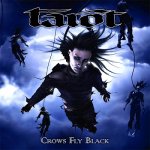 For me, being a fan of the group Nightwish, it seemed only natural to investigate Finland’s Tarot, which features Nightwish’s Marco Hietala on both bass and lead vocals.

Apart from Hietala’s presence in Tarot, however—his powerful and instantly recognizable voice, which pops up often on Nightwish albums—and a few nods toward Symphonic Metal thanks to the presence of a keyboardist, there is little to compare the two groups.

For the most part, on Crows Fly Black, Tarot plays rather straightforward Heavy Metal, much of it ultra-slammin’ and head-bangin’, which often brings to mind groups such as Accept, for instance, only enhanced by keyboards ala Deep Purple. Zachary Hietala’s thick-sounding guitar riffs and sizzling solos dominate tracks such as “Bleeding Dust,” “Traitor,” “Howl,” “Before the Skies Come Down,” “Ashes To the Stars,” and the title tune, which are all generally miles outside the realm of the keyboard-heavy, highly orchestrated Nightwish, yet nevertheless share the forcefulness and vibrancy of the other band.

Regardless, of Tarot’s nine studio releases between 1986-2011, Crows Fly Black is definitely one of my favorites…one that deserves to be played F***ING LOOOUUUD!!!