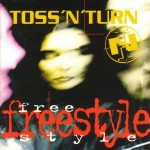 Toss ‘N’ Turn is a German band I discovered just within the past decade, a female-fronted group that apparently created only a single album released back in the mid-’90s.

Fronted by singer Jaqueline Cipriano, the band played Blues-inspired Hard Rock with a touch of AOR, funk, etc. on several tracks, and for the most part, Freestyle contains fairly enjoyable material.

On rollicking and straightforward tunes such as “Torture, Torture,” “How Do You Feel,” “One Night & A Heartache,” “In My Blood,” and “Confession,” I liken Toss ‘N’ Turn to bands such as Tesla or Bad Company, with the guitars front and center, and a touch of keyboards included for added spice. Meanwhile, Cipriano’s voice, raw and throaty and raspy, is perfect for the fourteen songs on offer here, especially on the rock shuffle “Back To The Wall” and the punching “Hungry,” two of my favorite tracks, and on lighter, acoustic guitar-driven moments such as “Life (The Ups & Downs)” and a cover of The Bangles’ tune “Eternal Flame.”

Although Freestyle contains virtually no major surprises, nothing truly innovative to set the music world ablaze, the level of musicianship is relatively high, with Cipriano being the unquestionable “star” of the show. Moreover, the guest appearance of Michael Sadler (Saga) on keyboards and background vocals (and acting as the album’s co-producer with the band) might shock a few people since the material on Freestyle is about as far from the music of Saga as one can get.

Regardless, fans of female vocalists such as Alannah Myles, Sass Jordan, or Lorraine Lewis (Femme Fatale) might find interest in Toss ‘N’ Turn, since much of the band’s music is of a similar nature.