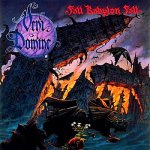 To be honest, the first time I heard this debut album from Swedish band Veni Domine, I’d thought someone had slipped on a new album from Queensryche, seeing as how Fredrik Ohlsson’s vocals had a definite Geoff Tate flair, with the same wide range, vibrato, and style of delivery. Be that as it may, the band also liberally incorporated Queensryche’s progressive-tinged metal sound into its music, along with obvious influences from groups such as Black Sabbath to Demon to Candlemass to Iron Maiden, only with the doomy and heavily symphonic atmospheres and dramatic song arrangements acting as a backdrop for Christian lyrics.

And although Fall Babylon Fall offered nothing truly innovative in the world of Heavy Metal, the level of musicianship, creativity, and songwriting prowess—especially on the twenty-one-minute epic “The Chronicle of the Seven Seals,” for example—did make for an enjoyable debut nonetheless.