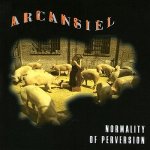 With some rather silly song titles on display here—”The Girl From Heaven and the Wolf Don’t Care if You Are Glad to Live” and “I’m Crashing Videotapes Behind the Mirrors Against Your T.V. Set”—one might believe this Italian Prog-Rock band is a bit eccentric, and they would be correct. But only to a certain extent.

Yes, the song titles, and some of the lead vocal acrobatics, are a bit “odd” overall, the band in many ways actually delivers a rather straightforward collection of Progressive Rock tracks—generally Neo-Prog mixed with some funky and jazzy AOR influences when it comes to the frequent sax excursions, the inclusion of some trumpet, and the grooves on several tracks, plus some Zappa-like weirdness when it comes to the overall song arrangements and the highly dramatic vocals—which sets Arcansiel apart from most other groups of the genre. Indeed, to me Normality of Perversion sounds as if it may have started out as a slick Steely Dan-inspired album but tossed into a Zappa “Zoot Allures-era” type of blender before its release.

So yes, Arcansiel is definitely unique, and Normality of Perversion may likely be an acquired taste for some listeners/fans of the “normal” Neo-Prog genre, but the group/album is also highly worthy of investigation.