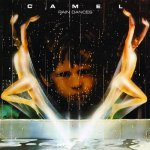 On Rain Dances, its fifth studio album, the legendary British group Camel added a touch of Jazz to its overall Symphonic Prog sound, providing some of the tracks with an almost Canterbury-Prog atmosphere. I’m not sure if this had to do more with the guest appearance of Brian Eno or (more likely, I suspect) because prior to recording, the band had recruited a new bassist, the talented Richard Sinclair (Caravan/Hatfield & The North), who replaced original bassist Doug Ferguson due to musical differences.

Either way, on Rain Dances, Camel showed actual growth from the style of its previous four studio releases—hey, what a concept, huh? A Progressive Rock group that actually “progressed.”

Anyway, this 1977 release is one of my favorite early albums from the band and one of the first platters I purchased from the band’s catalogue.