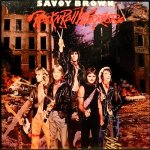 The U.K.’s legendary Blues-Rock band Savoy Brown entered the ’80s with a new vocalist by the name of Ralph Mormon (fresh from recording with The Joe Perry Project) and seemed to have gained some much-needed rejuvenation in the process, delivering one of its hardest-rocking collections of tracks (albeit, less Blues-Rock oriented than previous albums).

As always, band leader (and only original member) Kim Simmonds shines on lead guitar, and this line-up of musicians did a commendable job with the high-octane material. Tunes such as the rocking opener “Cold Hearted Woman” and the bouncing subsequent track “Georgie” immediately showed that Savoy Brown had shifted into slightly different territory, had actually progressed as a group, and it left me wanting more.

That came in the form of additional rockin’ and stompin’ tracks such as “Bad Girls (Make Me Feel Good),” “Dont Tell Me I Told You,” “Bad Breaks,” “Shot Down by Love,” “Nobody’s Perfect,” and “This Could Be The Night.” While many of these tunes, and even the mid-tempo songs “Got Love if You Want It” and “Lay Back in the Arms of Someone,” still often included that “older/classic” Savoy Brown style, the harder-edged delivery (very Aerosmith/Humble Pie in its sound and attitude) truly suited this particular quintet.

Therefore, it’s a shame this line-up recorded only one studio album, since Mormon’s gruff ‘n’ gritty vocals were a perfect fit for the band, and I would have loved to hear more material, despite Savoy Brown’s slight change in direction. Instead, the band fell apart shortly after this release and a live album, and it took many years before Kim returned with yet another revamped line-up of the group.

(RIP Ralph Mormon, who never got the recognition he so richly deserved.)