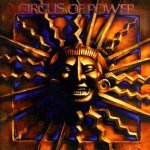 The group’s rough ‘n’ tumble, down ‘n’ dirty image mirrored its sound as well, with the band pumping out some driving and revving, sleazy and bluesy, thuggish and punkish AC/DC-inspired Hard Rock, with head-bangin’ rhythms and hooks galore. Basically, with pounding tracks such as “Backseat Mama,” “White Trash Queen,” “Heart Attack,” “Motor,” and “Call of the Wild,” the band came off as an East Coast version of L.A. Guns, delivering blistering ‘n’ blazing biker rock.

Circus of Power went on to create two additional releases in the years ahead, offering up more of the same style of music, yet the albums weren’t quite as driving, not nearly as raw or as hungry as this debut. Therefore, this collection of tracks remains my favorite within the band’s catalogue.