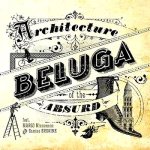 Wow, Beluga is extremely fun! The music on this debut album is sort of like a marriage between Gentle Giant and Zappa / Mothers Of Invention during the Apostrophe / Roxy & Elsewhere / One Size Fits All era.

Nothing on this release is in the least bit “commercial,” but is nevertheless melodic, with some vocal sections (most very Zappa-esque) even catchy. The instrumentation on tracks such as “Photosynthesis,” “Under a Black Cloud,” “Monologue,” “Trying to Be a Court Clown,” and the wickedly entitled “Sunny View (For Douchebags)” is quirky, often jazzy, and wonderfully impressive. Along with Zappa-like guitar soloing on occasion, there’s also a heavy emphasis on keyboards, many sounding like older synthesizers (which is where much of the Gentle Giant and Zappa comparisons pop up) with even a Mellotron tossed in for extra pizzazz (and fairly dominant) on the tune “Thylacine.”

Generally speaking, the band’s name, Architecture of the Absurd, perfectly describes the seven diverse tracks contained on the album. Now I can only pray the absurdly named band releases more of the same type of material…and soon! Prog-Rock these days does have a tendency to get rather boring (in my opinion, there’s too much “atmospheric Prog-Rock” along the lines of Porcupine Tree, Riverside, and Pink Floyd-wannabes droning on and on album after album with lazy rhythms and keyboard washes). So bands such as Architecture of the Absurd, with odd and often-changing time signatures, complicated and upbeat arrangements, and impressively diverse instrumentation, are sorely required to keep things exciting. Toss in some fun and quirky melodies and what you have on Beluga is music that reminds me of why I fell in love with Prog-Rock many decades ago.